It’s been a while since I first published the text-metrics package, which allows to calculate various string metrics using Text values as inputs. Originally the package was written primarily in C with wrappers in Haskell. At the time I needed maximal speed and did not care whether the algorithms themselves are coded is C or Haskell, as long as they work, and work fast.

However, recently there were quite inspiring blog posts about Haskell competing with C in terms of speed and memory consumption. One such a blog post is Chris Done’s “Fast Haskell: Competing with C at parsing XML”, which is a most entertaining read. Now that I have more free time I decided to go back to text-metrics and rewrite it in pure Haskell. The benefits are:

I decided to start with the simplest algorithm in text-metrics: hamming distance. This distance is only defined for inputs of equal length, so the signature looks like this:

Well, at least it did. I decided to replace Natural with Int, because all the functions we are going to use take and return Ints, so it’s no use trying to push proper types like Natural (which is also slower to work with).

Hamming distance is just the number of characters at the same indices that are different. So the C implementation was:

Looks dead-simple, but how to do the same in Haskell efficiently? Well, first of all we need an efficient way to traverse Text values character by character. We should remember that Text is a lot like a list of Word16 values internally. As I mentioned, some characters are represented as two consecutive Word16 values, and most characters are just one Word16. So we don’t know which is which, and that essentially makes it impossible to have indexing in O(1).

So we can’t access a character at a certain offset (as in *(a + i)), we should perform something like synchronous unconsing on both Text values (good that they are of the same length!). The text package provides tools for this in Data.Text.Unsafe. The Iter data type is our friend:

The Char value is an “unconsed” character and Int is the length of the character as a number of Word16 values (1 or 2). We will use three functions:

That said, here is a Haskell implementation of Hamming distance:

First we have to confirm that the input values are of the same length. Due to the reasons mentioned earlier, we have to traverse each of them to compute their lengths. If the lengths are equal we can start counting characters that are located at the same positions but are different. go is a tail-recursive helper that steps through the Text values using iter. na and nb are the indices we use to iterate over internal arrays of Word16 values, we increment them by da and db respectively. The result is accumulated in r. The strictness annotations in the form of bang patterns were optional in this case as GHC was able to figure out strictness itself, but I decided to keep them there, just in case.

Let’s see if we are close to the C implementation with this:

The weigh report shows that memory consumption is essentially the same. And here is a Criterion benchmark:

A matching pair is counted as a transposition also if the characters are close enough but in the opposite order. See more about this in the Wikipedia article.

The implementation is considerably more verbose for this one:

Inability to lookup characters at given index in O(1) was especially painful with this algorithm.

Memory consumption looks OK. Our Haskell implementation allocates more but residency is the same as with C version (you can track max residency with weigh-0.0.4 and later, I requested this feature some time ago and Chris Done was kind enough to add it).

We are slower than C here, but for short strings there is almost no difference, so I guess it’s OK as the package is mainly about working with relatively short inputs. Do not forget that we’re also more correct with this Haskell implementation because we iterate properly, taking into account existence of characters that may take two Word16 cells in Text‘s internal array.

There is also a function for Jaro-Winkler distance but it’s mostly the same, so let’s skip it.

Finally, probably the most popular function is levenshtein, which calculates the Levenshtein distance. The C implementation looks like this:

Some buzz here is about choosing between malloc and alloca. alloca allocates on the stack, while malloc allocates on the heap, so the latter is slower. This is not particularly important though. What I like about this implementation is that we can swap v0 and v1 by just swapping their pointers, how to translate that into Haskell?

I’ve come up with this solution:

It uses all the familiar tricks and most observations from the jaro example apply to levenshtein as well. Note that v0 and v1 are merged into one vector v. So I just add offset equal to length of a single vector to switch to v1, which is as efficient as swapping pointers.

Similarly to jaro, Haskell version allocates more but the max residency stays the same for both C and Haskell implementations.

And that’s a win, we are only just a little bit slower than C.

There is also Damerau-Levenshtein distance, but it’s similar (and yet less-readable), so again, let’s skip it in this post. 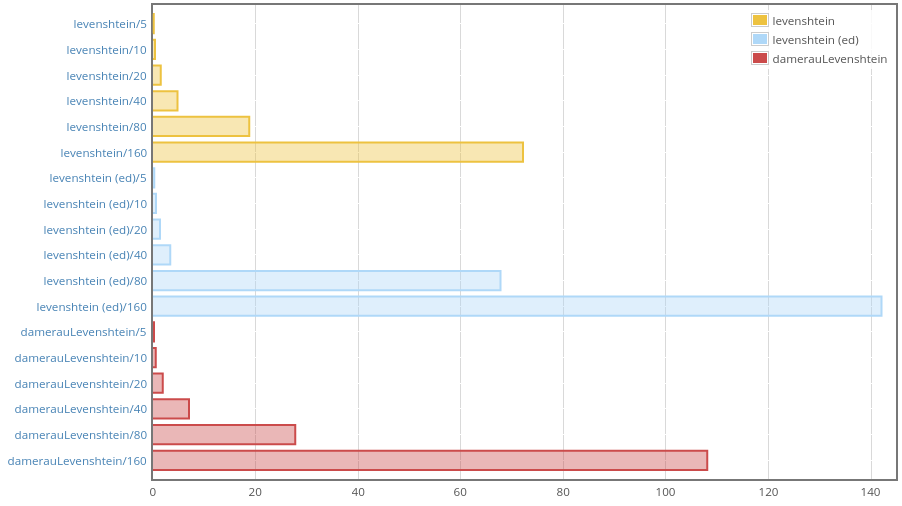 To make the benchmark fair, I fed Text values into text-metrics functions and Strings into levenshteinDistance. What can we see here? Clearly, it looks like edit-distance uses two different algorithms. We beat it in the case of long inputs, with short strings performance is roughly the same, but for input lengths from 20 to 64 edit-metrics performs better!

It turns out that for the inputs under 64 characters edit-distance uses the algorithm form this paper. So in the next version of text-metrics it makes sense to try to use that bit vector algorithm in a similar fashion and see if it makes things faster.

text-metrics-0.3.0 is written in pure Haskell, almost as fast as the previous versions (especially for not very long inputs), and is more correct (we handle characters represented as two Word16 values properly). I have also added more algorithms which I do not mention here because they were implemented in Haskell right away. Check the changelog if you’re interested.