It’s been a while since I released an Emacs package. The last one was hasky-extensions for inserting/removing Haskell language extensions. This time I publish hasky-stack, which provides a Magit-like interface to Stack.

For those who want to give it a try, here is how:

Now when you are inside a Haskell project directory or file, you can run hasky-stack-execute to get a popup with all commands currently available: 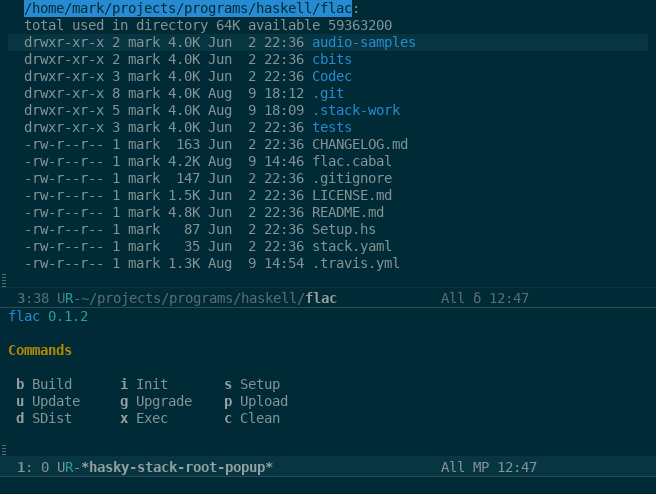 If you hit b now, a sub-popup for the build command appears:

Next you can toggle the switches and set options, then hit b again to build. You’ll be presented with all build targets in your project to choose from, etc. Note that if you would like to always build the default target (i.e. your entire current project), set hasky-stack-auto-target to t. When it’s not nil, hasky-stack won’t ask you build/test target using the default automatically (this is what you almost always want anyway).

The hasky-stack-new (which should be called from a new directory created for the project to initialize) asks for project name and allows to choose from a list of all available templates (which it detects for you automatically).

Right now the wrapper is rather basic, I’ve put it together in just several hours. I plan to improve and extend the package iteratively as I use it taking into account user feedback. Feel free to request features!